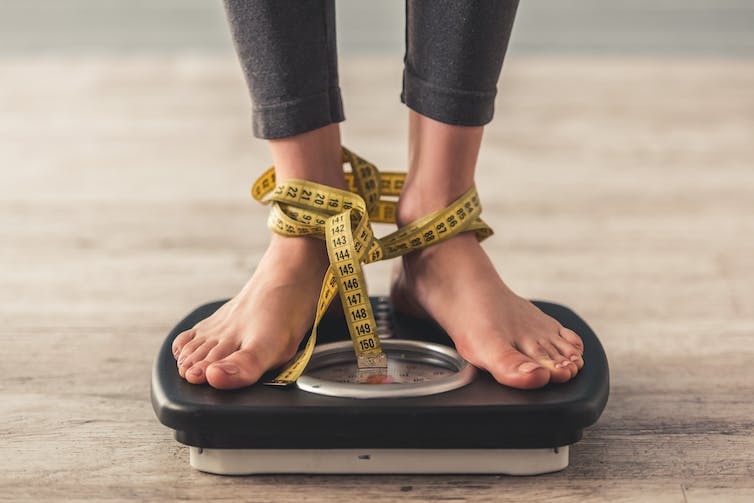 Is the scale telling the truth? (Image:VGstockstudio/Shutterstock.com)

Two things people often think about are money and their appearance. Past research has shown that there is a correlation between the two: People subjectively considered attractive earn more.

And body weight plays a major role in attractiveness. A person’s body mass index – which adjusts a person’s weight for their height – and their success in the workplace are linked. Put simply, thin people, especially women, are rewarded more than their larger colleagues. But those studies only considered how other people perceive you.

In new research, we looked at the flip side: Does our own perception of our bodies, even when incorrect, make a difference? In other words, does thinking you look fat or skinny affect your wages?

Knowing if a worker’s own perception of his or her weight makes a difference – rather than only the employer’s – could help determine the best way to mitigate the impact of weight discrimination on earnings. In addition, a better understanding of gender differences in weight perception might help explain the persistent gender wage gap.

Americans spend billions of dollars each year on making minor changes to their appearance with makeup, hair dye and other cosmetics. We also spend billions trying to change our weight with diets, gym memberships and plastic surgery.

Trying to live up to the pervasive images of “perfect” models and movie heroes has a dark side: body-shaming, anxiety and depression, as well as unhealthy strategies for weight loss or muscle gain. For example, anorexia nervosa involves the extreme over-perception of weight and claims the lives of roughly 10 percent of its victims. It also has a financial cost. Having an eating disorder boosts annual health care costs by nearly US$2,000 per person.

Why is there both external and internal pressure to look “perfect”? One reason is that society rewards people who are thin and healthy looking. Researchers have shown that body mass index is related to wages and income. Especially for women, there is a clear penalty at work for being overweight or obese. Some studies have also found an impact for men, though a less noticeable one.

While the research literature is clear that labor market success is partly based on how employers and customers perceive your body image, no one had explored the other side of question. Does a person’s own perception of body image matter to earnings and other indicators of success in the workplace?

We were interested in answering these questions because it is often easier to fix your own view of yourself than to fix the entire world’s.

Our recently published study answered this question by tracking a large national random sample of the first wave of U.S. millennials, born in the early 1980s. We followed about 9,000 of them starting in 1997 when they were teenagers and ending 15 years later when the oldest was 31. Our research followed these respondents over a critical time period when bodies change from teenage shape into adult form and when people build their identities.

The survey asked respondents to report their actual weight and height. It also asked each to classify themselves each year as “very overweight,” “overweight,” “about the right weight,” “slightly underweight” or “very underweight.” This enabled us to compare each person’s clinically defined BMI category, such as being underweight, with his or her perception.

As in other research, women in our sample tend to over-perceive weight – they think they’re heavier than they are – while men tend to under-perceive theirs.

What other people think matters more

While self-perceived weight, especially when incorrect, can influence self-esteem, mental health and health behaviors, we found no relationship between the average person’s self-perception of weight and labor market outcomes like wages, weeks worked and the number of jobs.

In other words, it’s not what you think about your appearance that matters in the workplace, it’s just what other people think. Worrying if eating another cookie will make you look fat may harm your self-esteem, but thinking you’re overweight likely will not affect your earnings.

Because we find that women earn lower wages than men do even when accounting for weight perception differences, it appears the well-known gender pay gap is not due to differences in self-perceived weight.

While the continued gender penalty in the labor market is frustrating, our finding that misperceived weight does not harm workers is more heartening. Weight misperception is common, but thinking you’re heavier or lighter than you are doesn’t dampen earnings.

At the same time, it’s important to remember that although self-perceived weight doesn’t appear to affect wages, it still takes a toll on mental and physical health.

Passing over heavier workers to hire or promote less productive but thinner workers is inefficient and unfair. Our results indicate that expanding efforts to reduce discrimination on the basis of body weight in the workplace is important.

Since employers’ perception of weight is what matters in the labor market, policies to reduce the social stigmatization of body weight, such as curbing body-shaming, make sense. Changing discrimination laws to include body type as a category would also help. For example, Michigan is the only state that prohibits discrimination on the basis of weight and height.

We believe expanding such protections would make the labor market more efficient and fair.

Patricia Smith, Professor of Economics, University of Michigan and Jay L. Zagorsky, Economist and Research Scientist, The Ohio State University. This article was originally published on The Conversation. Read the original article.