On Monday, a University of Akron professor sent an email acknowledging a grade boost solely for female students, in an effort to encourage them to study information sciences.

According to Campus Reform: “On Monday, a Reddit user leaked a screenshot of an email sent by Akron professor Liping Liu informing students their final grades may be raised a ‘level or two’ if they are female as part of a ‘national movement to encourage female students to go to information sciences.’”

The initial photo uploaded to Reddit was removed, but an anonymous student provided Campus Reform with a screenshot of the email. 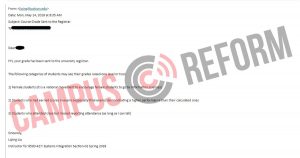 This student was critical of her professor’s choice to give female students a higher score. “I truly think that my professor’s efforts are counter intuitive,” the student, who wishes to remain anonymous, told Campus Reform. “There is no need to persuade women to enter a field they are uninterested in just so we can meet a quota to be able to say that men and women are equally represented in Information Science.”

Liu, in an email to The College Fix, said that his classes have one or two female students in a classroom of twenty to thirty. According to him, female students would not thrive without the boosted grades. This grade boosting, Liu says, was part of an experiment to try to motivate female students, but that he is not continuing the concept.

University Provost Rex Ramsier, in an email to The College Fix, said that the university “does not discriminate on the basis of sex,” and verified that grades were not adjusted based on gender. “While the professor’s stated intention of encouraging female students to go into the information sciences field may be laudable, his approach as described in his email was clearly unacceptable,” Ramsier said.

This isn’t the first time, nor will it be the last time, that a professor attempts to change the way that students are assessed in their classrooms.